I caffeinate amid Israelis.

In my neighborhood is a coffee shop called Aroma Espresso Bar, one of 100-something Aroma franchises globally. 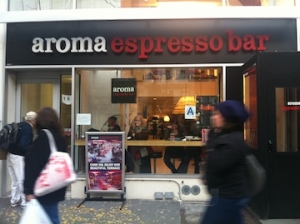 Aroma: Good for Coffee and Hebrew

According to its website, the company was founded in 1994 and is “the largest and most successful espresso bar chain in Israel, serving over 25 million loyal customers a year.”

This particular Aroma is also a great place to hear Hebrew. I have been drinking way too many lattes over the past few days in order to justify hanging out there for extended periods of time.

I sit there and try to figure out how many people around me are speaking Hebrew, and I do my Pimsleur lessons, which means I am antisocially installed in a chair with a headset, muttering Hebrew words and phrases in response to the prompts in my audio lessons.

I tend to slouch down and kind of hold my hands over my mouth so I less conspicuously appear to be talking to myself.

One observation: studying Pimsleur there works better in the morning, when the music is quieter and the crowds are smaller. This afternoon the Pimsleur prompts were competing with lots of loud conversations and Katrina and the Waves (“Walking on Sunshine”) and Bobby Helms (“Jingle Bell Rock”). 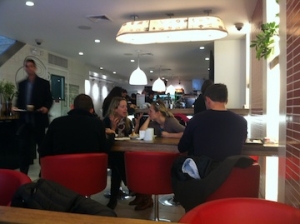 The owner, who used to be in the technology business, is often present, and I have talked to him a number of times. Last week I told him that I was soon going to be starting Hebrew, and that I hoped he would let me try it out on him.

Today when I came in, I asked him how he was in Hebrew, and he replied in Hebrew, and asked how I was, and I replied, also in Hebrew. I am doing pretty well with that line of questioning and have completed it successfully several times with different people.

It is not a terribly profound line of inquiry. Nonetheless, I find it satisfying.

He asked how I was learning Hebrew, and I showed him my Pimsleur lessons on my iPhone. He said, “So you don’t want me to teach you anymore? I am insulted.”

I laughed and said that no, I definitely did, but that I was trying to become a little more interesting first. 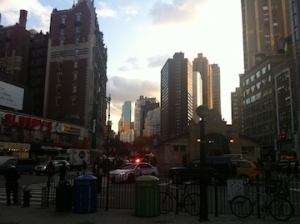 On Facebook yesterday, I posted a note asking people for ideas for Hebrew-related activities. I promptly got this list of suggestions from a high-school friend in California:

Then a writer friend, Marty Kihn, whose hilarious book House of Lies: How Management Consultants Steal Your Watch and Then Tell You the Time is being turned into a Showtime series with Don Cheadle and Kristen Bell, made this helpful observation: “I believe there is a Bible written in Hebrew.”

A college friend offered, “Now you will commiserate with millions of Jewish girls and boys who had to learn Hebrew only to forget it all weeks after their Bar/t Mitzvah.” 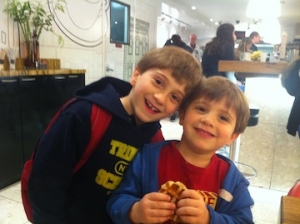 I am finding that a really significant percentage of people I know happen to know at least something about Hebrew. This is very helpful, but I am kind of wondering, where was I when all this language-learning was going on?

This afternoon in Aroma, I ran into a friend of mine and her two young sons, and sure enough, she speaks Hebrew, too, and even her boys know some as well.

Showing utter disregard for child-labor laws, I promptly solicited some language instruction from the kids. I learned beten (stomach) from the older one, while the younger one sang to me in Hebrew.

Both boys were gripping waffles at the time. I have never before been taught by someone holding a waffle.

I told them they know way more Hebrew than I do, so maybe when I see them next, they can quiz me to see whether I remember what they taught me. The older one seemed to consider this proposition rather seriously.

As a young child, I always found it interesting to realize I knew something a grownup didn’t. For most kids the volume of such realizations increases quickly with age, perhaps helping to explain television programming such as Who’s Smarter Than a Fifth Grader? and also to illuminate how many teenagers come to learn that adults know absolutely nothing about anything.

You’re brilliant and an enjoyable read. How did I not discover your blog before? Maybe I need to re-examine my dislike of Pimsleur for my own, slower Hebrew adventure.