I go to another (smoky) event for Dutch people.

The other night I went to another NLBorrels gathering at a midtown bar. As I have mentioned previously, this organization holds regular social and networking events for Dutch expats living in New York (and other cities as well). 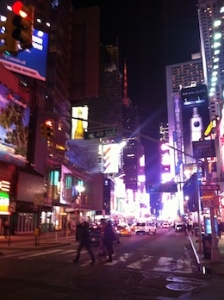 Times Square, on Way to NLBorrels

There was much discussion this time of pronunciation, prompted by my I-hope-not-too-annoying questions. Particularly around the Dutch g, which packs a lot of phlegm. A group of four of us were addressing the problem of the g when one helpful tall Dutch man offered an analogy to illuminate the sound’s nature.

“Like deep-throating,” he said. Another Dutch man standing next to him promptly walked away. It is hard to say whether there was a causal relationship between the two events, as temporal relationships are often mistaken for causal ones, but I vote for causal in this case.

Anyway. While there, I also asked about the n’s on the ends of words. Infinitives in Dutch (as well as other words) end in n. My Pimsleur audio lessons almost never pronounce them, however. So a word like schrijven (to write) would be pronounced shrigh-veh (without the n) by my Pimsleur people. When I do written grammar exercises, therefore, I keep not writing the n’s on the verbs because I have been hearing them n-less on Pimsleur.

So I have been knocking myself out with my Pimsleur lessons to learn the less posh version. I am not really about posh, but I can’t say I deliberately go out of my way to be un-posh. I am curious to know how Pimsleur settled on the choice of regional accents.

The person who told me all this north-south stuff was from the south of Holland, by the way.

As the evening proceeded, every little pronunciation choice started to feel very loaded. People seemed to be able to determine other people’s geographical origins very precisely based on the execution of their consonants and vowels. In addition, my pronunciation was frequently corrected. Don’t get me wrong: I like being corrected. It is much better, and far more productive, than when people tell you you are amazing because you can utter a single understandable word in their language!

The Dutch are tough customers when it comes to language praise. For my skills that night I did score one “Wow, that’s amazing! You should be in the Guinness Book of World Records!” Which was very gratifying, but I think more than the two sentences I had just produced would be required to earn that honor. Mostly I just got corrected. I was told at one point that my accent sounded Turkish. Soon after that I was told it sounded German. Another time I was informed that I wasn’t doing a particular vowel correctly. I have now forgotten which vowel, so the problem is unlikely to be fixed at present.

I talked at length to someone about Russell Shorto’s book The Island at the Center of the World: The Epic Story of Dutch Manhattan and the Forgotten Colony that Shaped America. As mentioned in a previous entry, I am currently reading it. I told him (my NLBorrels acquaintance) that I do not feel my own education about New York (much of it coming from history books I have read since arriving here in 1990) neglected New Amsterdam’s importance in the city’s history.

In fact, I said, I feel very connected to the cultural influence of the Netherlands in New York. And I do! I feel much more at home here than I do in New England, with its more Puritanical antecedents.

My new friend told me he found the culture here more open and less social-circle-oriented than in Holland. But he said the food was worse. He seemed rather disgusted by it, in fact. I believe he cited bread in particular. Europeans often do. Which I can understand, given the state of bread there versus the state of bread here.

He also told me his American girlfriend lived in Holland for a year without really learning Dutch. That’s the problem with trying to learn Dutch. They so often can speak the language you speak natively that, in order to learn Dutch, you have to try awfully hard not to default to the more familiar common tongue. It is a lot easier when you are studying a language where people’s English skills totally suck. Then they are desperate enough to need and appreciate your paltry vocabulary and your frequent grammatical errors, and the supplementary use of gestures, grimaces, and wild gesticulations as a substitute for actual adult human communication.

I confess I had a very hard time with the cigarette smoke. I felt like I was going to faint. It was okay last time, but this time I almost had to leave early. By the next day, I had a cold. Again, hard to know whether this was a causal relationship. Did the smoke bother me more because I was already getting sick? Or did the smoke hasten my cold?

Being surrounded by healthy-looking younger people who chain-smoke kind of makes me want to challenge them to a race. Smoking just isn’t good for you. I can prove it. If a woman well over 40 and still injured could kick the butts of athletic-looking 20- and 30-something-year-old men, do you think they would consider quitting?

Awesome post
I have been enjoying your adventures. How crummy about all the cigarette smoke.

By accident I arrived at your website. By the way, is there such a thing as “by accident”? Nicely written blogpost. I am Dutch myself, from the north (Den Haag) ... hopefully not too posh haha I live in Holland. Went on holiday to New York (and the US) for the first time 2 years ago, such a great and vibrant city!

I saw you mention there is no pronouncing of the -n at the end of a word in the south of Holland. I believe that is not right. It is just that in the north and the south the biggest difference is in pronouncing the -g. Much more pronounced in the north (so by me as well) and less in the south. I also believe in the north we speak a bit more articulated.

Oh and I am a non-smoking woman too :-) Can’t stand cigarette smoke.

Well bye for now and from now on I will take a look at your blogs every now and then.

Thank you so much for your comment, HS! Okay, I just went and listened to a Dutch Pimsleur lesson and promptly came across an infinitive and seriously cannot hear the “n” on the end of it. I will try to post an audio clip of it in the next day or so. You are not the first person to respond with skepticism to my n-less observation, so I need to cough up an example. Perhaps my ears are the problem. :) I am definitely not ruling that out as a possibility.

This is a language mystery I must get to the bottom of!!!!