Not Fond of the International Phonetic Alphabet

I got back late last night from Michigan, where I taught a grammar class yesterday at a Kalamazoo company. I love teaching grammar classes for adults.

My Seatmates on the Flight Home Last Night

People care about grammar, I think, much more than the popular perception of indifference would suggest.

From one of my McGraw-Hill books, French Verb Tenses by Trudie Maria Booth, I just learned that you use tu when praying to God and talking to a pet. Good to know.

Now that I think about it, not knowing it has plagued me for decades, dating back to many dictionary encounters in my past. It is frustrating to look up a word to figure out how to pronounce it and then have to run around looking up how to pronounce the various phonetic symbols used to represent its pronunciation on the printed page. The IPA is supposed to help you, by showing you in a standardized way how to pronounce things across languages that have different alphabets and that contain sounds not used in your own language. But it doesn’t help you if you don’t know it.

And the thing is, I do not seem to be motivated to try to learn the International Phonetic Alphabet. It is one of those things. I started to read the Wikipedia entry on it and got a headache, so I abandoned it.

Also in my same verb-tense book I read, “French vowel sounds are much tenser than the English ones.” This sentence I found amusing. I do sometimes feel tense when I try to speak French, but I think for different reasons. 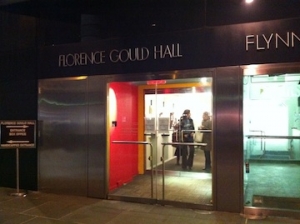 I did a bunch of Pimsleur today. In the evening, I also went to a major French cultural institution, the French Institute Alliance Française (FIAF) on the East Side, to see a 1992 French film called La crise (The Crisis). It was subtitled, but I resolved to cheat as little as possible.

The promotional copy on FIAF’s website read: “High-powered businessman Victor loses both his wife and his job on the same day!” Without the exclamation point, that might have sounded pretty depressing, but the punctuation cheered me right up. Coline Serreau, the director, was going to be present and do a Q&A afterwards.

I actually did better than I expected understanding the film’s dialogue. I didn’t love the movie—found it exaggerated in a way that didn’t quite work for me—but I enjoyed it nonetheless and felt glad to be testing out my French comprehension in this way.

After the movie, because I have had mostly bad experiences with Q&As, I considered sneaking out early, but since everyone else stayed put, and since I was sitting front center like the geek that I am, I stayed put as well.

And I was glad I did.

Serreau was cool, witty, authoritative, and impressive. I hadn’t realized she did the film Trois hommes et un couffin (1986), which was remade in the U.S. as Three Men and a Baby, and which I naturally saw in French, because in the year it came out I was a leather-jacket-wearing, cigarette-smoking college student who shunned American films in favor of foreign-language offerings whenever possible.

Walking to the subway from FIAF was romantic. I passed CBS, the Apple Store, the Plaza Hotel, and dark clusters of large trees at the southeastern corner of Central Park. I love New York.

…to Cap a Night of French Culture

Interesting fact about English, ‘you’ used to be the formal, equivilant to ‘vous’ in French, and for the informal ‘tu’, ‘thou’ was you used.  So in the older versions of Christian prayers it is still used, i.e. “hallowed be thy name, thy kingdom come” etc. So we are using the formal all the time when we say ‘you’! English is a more formal language than we thought!